With an introduction and Q&A with director Mark Kidel.
Running time: 80mins

“I pretended to be somebody I wanted to be until, finally, I became that person, or he became me” (Cary Grant)

A new Cary Grant documentary comes to Bristol hot on the heels from its international premiere at Cannes International Film Festival. Watershed are now screening the English Premiere as part of their Cinema Rediscovered season, in partnership with the Cary Grant Festival.

The film explores Cary Grant’s life from the perspective of his LSD therapy sessions, using extracts from his autobiography (spoken by Jonathan Pryce) and home movie footage (much of it shot in Bristol) to piece together a moving account of his incredible and sometimes uncomfortable journey from Archie Leach to global film icon, Cary Grant.

“Everybody wants to be Cary Grant. Even I want to by Cary Grant” (Cary Grant)

Much is being made of Cary Grant’s acid trips, but whilst this a useful cinematic device for exploring his subconscious, the film transcends the sensationalist tone of many of its reviews (see this Vice piece for example). In an article in the Guardian producer Nick Ware suggests that his experience with LSD not only coincided with, but also enabled, Cary Grant’s most critically acclaimed performances:

“This was the time of North by Northwest and Charade. So all that period when he is the biggest box office star in the world is also the period when he’s taking LSD. He has reached this incredible level of total minimalism, inner peace. I’m sure the acid informed the acting.”

One of the most fascinating things about the film is the home movie footage itself – not just because there are nostalgic shots of Bristol – but because it reveals Cary Grant’s astonishing eye for the camera. This is not your typical bio-pic. What is refreshing about this film is that it avoids both the traditional hagiographic celebrity study and the warts-and-all exposé, to construct a powerful celebration of Cary Grant’s humanity, and – by extension – our own. 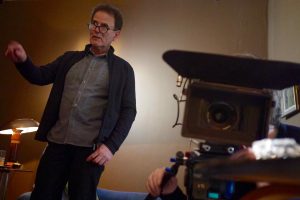 We were lucky enough to welcome Bristol-based director Mark Kidel to the 2016 Cary Grant Festival where we were given a sneak peak of work in progress. Mark joins us again for an introduction and Q&A.