We challenged you to write, shoot and edit a 90-second film inspired by Cary Grant’s North by Northwest. A shortlist of juicy micromovies was screened on the Big Screen in At-Bristol’s Millennium Square – right opposite the Cary Grant statue – throughout the week leading up to the festival and the winner was announced at the Festival Gala Screening of North by Northwest.

And The Winner is… 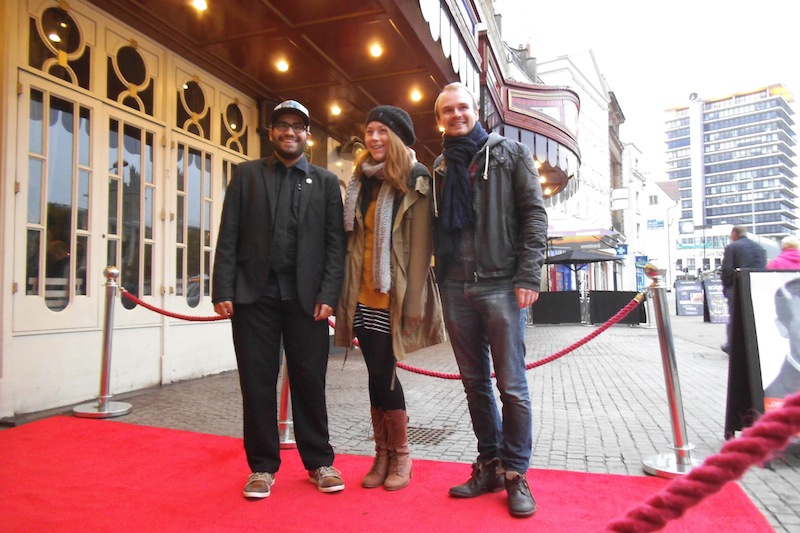 Filmmaker Rob Ayling, currently undertaking a Masters in Filmmaking at London Metropolitan University, said “I want to thank all of the judges and the people of Bristol who saw our film. Winning the Cary Grant Film Challenge is a great acknowledgement of our abilities as storytellers and our love for cinema and of course the brilliance that was Cary Grant.” The winner received a limited edition print of Morph by Morphwest created especially for the festival by Merlin Crossingham, director of Aardman’s new Morph series. 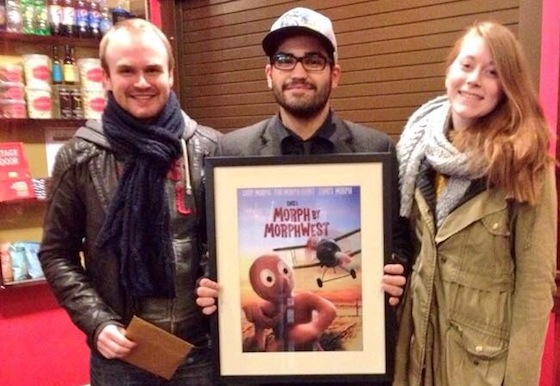 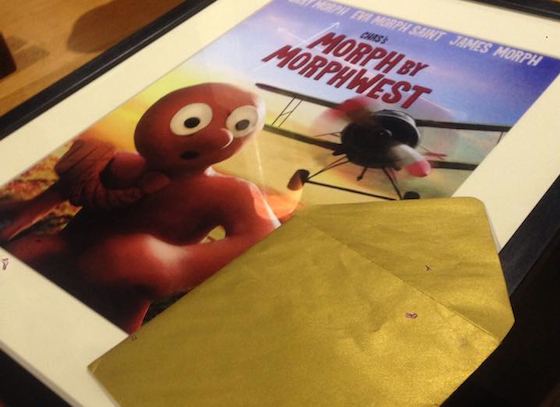 Congratulations to Rob Ayling and team for their winning entry, The Girl With the Compass Tattoo:

The jury loved this film because of the amount of double crossing they managed to fit into 90 seconds.

Congratulations to all of the other shortlisted entries, which you can watch below:

The jury commended this film for its brilliant references to North by Northwest, including recreating the R.O.T. matches.

The Man on Abraham Lincoln’s Nose:

The jury loved the cardboard Mount Rushmore and inter-cutting between animation and live action.

What Does The ‘O’ Stand For?

The jury loved the use of Bristol locations and the humour.

Shadow of An Affair

The jury commended the Hitchcockian mise-en-scene and use of costume.

Once Upon A Time in The Canteen:

The jury loved the fusion of Hitchcock and Spaghetti Western genres.

Can you write, shoot and edit a 90-second film inspired by Cary Grant’s North by Northwest by the end of September? The challenge is free for anyone to enter and we are accepting entries from the 1 September until the deadline of Friday 3 October 2014, 5pm.

The main rules are that it must be under 90 seconds and must include at least one of the following:

Shortlisted films will be featured on our website and shown on The Big Screen At-Bristol Millennium Square, right opposite the Cary Grant statue over the festival weekend.

Winning films will be screened before our glamorous red carpet gala screening of North by Northwest at the Bristol Hippodrome on Sunday 12 October.

“Philip Vandamm: Mr. Kaplan, you are quite the performer. First you’re the outraged Madison Avenue advertising executive who claims that he has been mistaken for someone else. Next, you play the fugitive from justice supposedly trying to clear himself of a crime he knows he didn’t commit. And now, you’re the jealous lover spurned by love and betrayal.”

Thornhill must find Kaplan to clear his name, and embarks on a 2000-mile chase across America, dodging a crop-duster and clinging to the face of Mount Rushmore.

The suit in North by Northwest was voted the most stylish item of clothing in the history of cinema by GQ Magazine. In his 2006 Granta essay, Cary Grant’s Suit, Todd McEwen claims that:

“North by Northwest isn’t a film about what happens to Cary Grant, it’s about what happens to his suit. The suit has the adventures, a gorgeous New York suit threading its way through America. The title sequence in which the stark lines of a Madison Avenue office building are ‘woven’ together could be the construction of Cary in his suit right there—he gets knitted into his suit, into his job, before our very eyes.”

Cary’s look in North by Northwest is a major influence on TV series Mad Men, which The Guardian claims has influenced the way men dress. We’re offering a prize of a bespoke shirt, worth £100 from A Suit That Fits for the best dressed man on the red carpet at our gala screening of North by Northwest the Bristol Hippodrome on Sunday 12 October – book now.

Look out for Hitchcock’s cameo as he misses the bus – will you make a cameo appearance in your film?

“Roger Thornhill: The moment I meet an attractive woman, I have to start pretending I have no desire to make love to her.

Eve Kendall: What makes you think you have to conceal it?

Eva Marie Saint’s original line was actually: “I never make love on an empty stomach”, but it was overdubbed as it was considered too risqué.

The Gibson, featured in the above sequence is possibly the inspiration for James Bond’s Martini “shaken not stirred.” You can taste one, amongst other Cary Grant inspired cocktails, at our Cary Grant Cocktail Party on Saturday 11 October – book now.

Thornhill lights Eve’s cigarette with a box of matches which become important to the plot later on when he uses it to attract Eve’s attention at Vandamm’s lair.

…action from every direction

The crop-duster scene is one of Hitchcock’s most iconic scenes and allows Cary Grant to exhibit his sheer athleticism, learned from his training as a tumbler with Bob Pender’s Troupe of Acrobats. Don’t miss our workshop on how to Walk and Talk Like Cary Grant (plus a Debonair Cream Tea) at the Avon Gorge Hotel where he used to stay on visits home – book now.

North by Northwest was the precursor to the 007 franchise, influencing Ian Flemming’s novels and their film adaptations. Cary Grant was offered the lead in the first Bond film, Dr No, but he declined the part.

Professor Andrew Spicer (UWE) will be talking about Cary Grant as the inspiration for Ian Flemming’s 007 in Cary Grant: The James Bond Who Never Was in the From Horfield to Hollywood session at Watershed on Saturday 11 October – book now.

The original idea for film was inspired by Hitchcock’s dream of a chase across the faces of Mount Rushmore, with Cary Grant sneezing in Abraham Lincoln’s nose. Ernest Lehman’s Oscar winning script (Best Original Screenplay) started life with the working title The Man On Lincoln’s Nose. 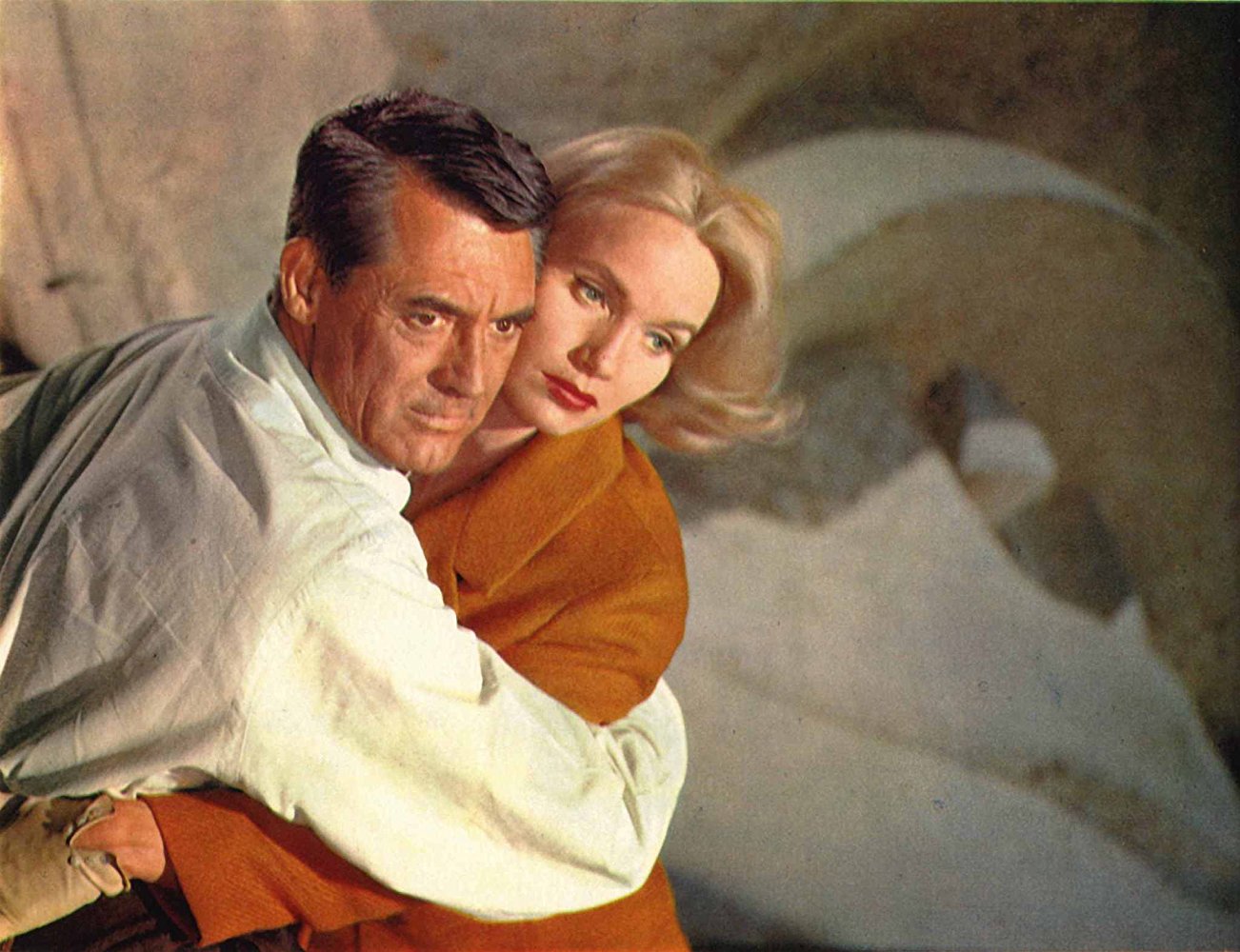 Lehman said he wanted to write “the ultimate Hitchcock picture”. The writing process took Lehman an entire year, including several periods of writer’s block as well as a trip to Mount Rushmore to do research for the film’s climax. You’ve only got a month!

“Roger Thornhill: When we get out of this, you can ride the train with me again.

Eve Kendall: Is that a proposition? 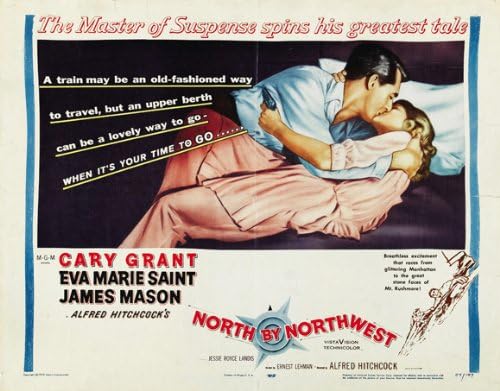 Dr Kathrina Glitre will be talking about Cary Grant’s leading ladies and his enduring sex appeal in “Every Girl Should be Married – to Cary Grant: Romance and Star Power” in the From Horfield to Hollywood session at Watershed on Saturday 11 October – book now.

Enter your 90-second homage to Cary Grant’s most iconic Hitchcock collaboration, for a chance to see your film on the Big Screen At-Bristol Millennium Square and before our festival gala screening of North by Northwest at the Bristol Hippodrome.

If you are not up for the full-blown film challenge, then join us on Instagram, Facebook, Twitter and Vine. We want you to send pictures and videos of yourself inspired by Cary Grant – snap yourself in your best classic Hollywood outfit; recreate classic film scenes such as the crop-duster in North by Northwest; or if you are in Bristol, then pap yourself next to the Cary Grant statue in At-Bristol Millennium Square. Just make sure you use the #carycomescome hashtag. We’ll feature our favourites on Twitter and Facebook.