Pay homage to our very own Bristol boy Cary Grant next to his statue in At-Bristol’s Millennium Square, where the Cary Grant Festival will be exploring his relationship to the golden age of Transatlantic travel as part of the Bristol Harbour Festival celebrations. Come find us at our pop-up marquee where you can snap your Cary Grant selfies, book tickets for the festival, buy official festival merchandise to help raise money for the festival and generally have a spiffing time.

Born Archibald Leach in Horfield in 1904, Cary Grant’s life was shaped by his relationship to the sea. He was influenced by growing up in a port town, and wrote about frequenting the docks, where he found solace from an unhappy childhood:

“I regularly haunted the Bristol wharves where in those days, schooners and steamships came right up the Avon River into the center of town; and on weekends, when most of my school friends were playing cricket, I sat alone for hours watching the ships come and go, sailing with them to far places on the tide of my imagination, trying to release myself from the emotional tensions which disarranged my thoughts. I once even applied for a job as cabin boy, but was turned down not only because I was too young, but because I couldn’t bring permission from my parents.”

He wasn’t to cross the Atlantic until July 1920 on the RMS Olympic – the Titanic’s sister ship – to New York, where he worked his way up from Broadway to Hollywood and reinvented himself as Cary Grant. 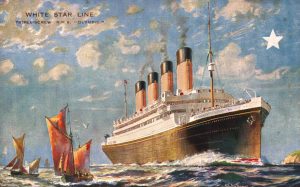 In his autobiography he reminisces about meeting famous film stars onboard: “Among the fellow passengers were newlyweds Douglas Fairbanks Sr. and Mary Pickford, the world’s most popular honeymooners and the first film stars I ever met. They were gracious and patient in face of constant harassment, by people with cameras and autograph books, whenever they appeared on deck; and once even I found myself being photographed with Mr. Fairbanks during a game of shuffleboard.” 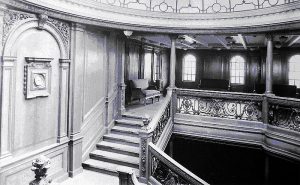 The Olympic was fitted out inside as an exact mirror of the Titanic, but unlike her sister, she was nicknamed “old reliable” for her a long service as a troop transport in the Great War of 1914, even sinking a German submarine. After the war she was refurbished by the White Star Line and was finally decommissioned in 1935.

“Manhattan Island. That skyline in the early-morning July sunshine. New York City. There it was; but was I there? Was I actually there at the ship’s rail, neatly scrubbed and polished, standing with a small, solitary band of Pender-troupe boys–none of whom had slept all night for fear of missing the first glimpse of America? The excitement. Those skyscrapers I had seen so many times before. Oh my, yes. In England. In Bristol. In the films.”

Cary Grant went on to play many naval characters, and boats feature in many of his films, including An Affair To Remember (pictured above).

Cary Grant returned to Bristol many times and clearly felt a strong connection to the Harbour: