Liberating the Leopard: The Making of Bringing Up Baby (1938)
Mark Glancy (Queen Mary University of London)

Bringing Up Baby offered Cary Grant one of his most distinctive roles. He does not play the debonair man-about-town character that was already becoming his trademark in 1938. He is instead a bespectacled paleontologist, interested only in fossils, and finding the one last bone that will complete his reconstuction of a brontosaurus skeleton. His orderly, logical life is turned upside down when he meets a high-spirited, freewheeling heiress played by Katharine Hepburn. She brings adventure and playfulness into his life, as well as a real, live leopard named ‘Baby’ that they track through the forests of Connecticut.

This fast-paced, unpredictable screwball comedy is ultimately a celebration of casting off discipline, defying bourgeois convention and embracing disorder. Thus, it seems entirely fitting that the film was made in much the same spirit. To the chagrin of executives at RKO studios, the director Howard Hawks refused to stick to the script, the shooting schedule or the budget, and instead encouraged his stars to improvise on set. They gleefully agreed, and while the executives seethed, the directors and his stars created a comic masterpiece.

Based on research in the RKO studio archives, this talk reveals how Bringing Up Baby was made and remade by Hawks, Hepburn and Grant, and the playful spontaneity that they brought to it. It also explores the impact that the film had on their careers, and especially on the career of Cary Grant, whose comic personality was liberated and enriched while tracking leopards in Connecticut. 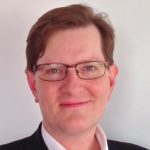 Mark Glancy is Reader in Film History at Queen Mary University of London. He is currently writing a biography of Cary Grant and serving as the editorial consultant for the upcoming documentary Becoming Cary Grant. His other media work includes articles on film for the magazines BBC History and History Revealed, and recent appearances on the Radio 4 programmes Archive Hour, Back Row and Great Lives. His publications include When Hollywood Loved Britain: The Hollywood “British” Film, 1939-1945 (Manchester University Press, 1999), The 39 Steps: A British Film Guide (Tauris, 2003), and, as a co-editor, The New Film History: Methods, Sources, Approaches (Palgrave, 2007). His most recent book is Hollywood and the Americanization of Britain, from the 1920s to the present (Tauris, 2013).

More about the other talk at this event: Kiss Him For Me
Back to the overview of the The Man From Dream City event