They grow up so fast..! Can’t believe its two decades since the Cary Grant statue was first unveiled by his window Barbara Jaynes back in 2001. Join us at the Christmas Fair in Millennium Square to wish the “statue” Cary a very happy 20th birthday. The wonderful Après Bar have generously reserved some outdoor seating next to the statue so come on down and pay a safely-distanced homage to one of Bristol’s greatest stars. 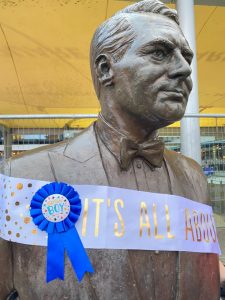 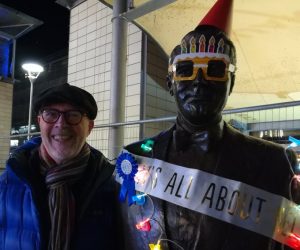 We’ll be joined by David Long, the man who spearheaded the campaign to erect the statue, to reminisce about the unveiling and how he convinced Bristol to dedicate a lasting memorial to Cary Grant. We won’t take too long, as it will be very cold, but join us online afterwards to hear more about how the statue came about with a Conversation with David Long, at 7.30pm GMT.